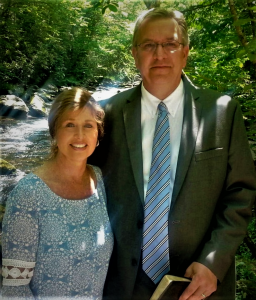 Chris was born and raised here in Maryville, Tennessee the third of three sons of Mattie and Paul Pass.  His family joined Grandview Baptist Church in 1963.  Chris attended Union Elementary School and graduated Heritage High School in 1979.  He then attended Knoxville Area Vocational School where he graduated with a certification degree in mild steel welding.

Welding took Chris to the shipyards of Savannah, Georgia.  On the day he arrived in May of 1980, God introduced him to his soulmate and best friend for life, Cydney D. Kliener Pass.  They were married three years later on July 2nd, 1983.  Their son Christopher was born in June of 1985.  They left Savannah in January of 1986 returning to Maryville where they call home today.  In 2010 Chris and Cydney were blessed to receive Amelia Rose Godman (who prefers to be called Amy) join their family as Christopher’s wife.  Chris, Sr. was in the automotive industry for 32 years now, with the last 16 years with the Rice family of dealerships.

Chris and Cydney have been fortunate to serve as adult Sunday School teachers for several years here at Grandview.  He has also taught in Grandview’s children services.  Chris and Cydney are two of several volunteers in a ministry team from Grandview who support Lost Sheep Ministries of Knoxville (Under the Bridge Ministries).  Chris was ordained as a deacon for Grandview, January 9th, 2005.  He accepted the call of the Lord to serve Him in pastoral and evangelistic ministries in late 2011.  Since the beginning of 2012, Chris has attended Liberty University of Virginia, in Wilmington School of the Bible Department pursing a Graduate of Theology in Biblical Studies Degree. Our driving desire is to serve our Lord and Savior, Jesus Christ.